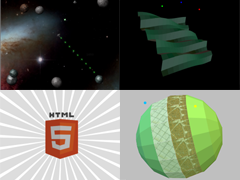 Demos and experiments using the new HTML5 Canvas and JavaScript!

A number of demonstrations and experiments with the HTML5 Canvas 2D graphics context and modern JavaScript techniques.

Including Asteroids game demo, spinning HTML5 logo, 3D graphics demonstrations and some neat 1K demos that are under 1024 bytes.

All the code can be viewed and some is packaged up ready for download if you want to see how they work or try it yourself! 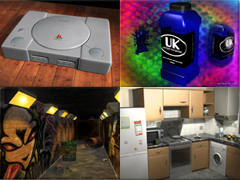 Gallery of images I have produced over the years using various 3D packages.

If you don't want to view them all, this is probably the best example.

The galleries shown here contain a selection of renders created in several 3D programs since 1995. Most using Lightwave 3D.

I haven't done much in this area for a while - so please excuse the 1990's style TABLE based pages... 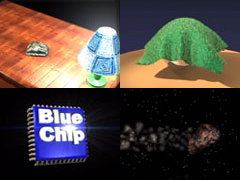 Some of these files are rather old though, so some codecs may be few and far between on modern PCs. 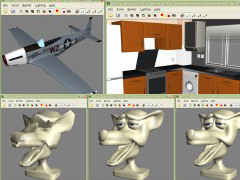 The K3D Lightwave object viewer is an open source project under the LGPL license.

Written in .Net C# around the time I was experimenting with that language and a nifty little OpenGL wrapper called Tao that allowed full hardware accelerated 3D in .Net, without the horror of MS DirectX.

Has lots of cool display modes and other funky stuff, all of which can now probably be done just using WebGL and JavaScript in a web browser!

I love it, all of it, even the mad stuff. I have hundreds of hours of DJ mixes, CDs, live and studio mixes from 1988 to the present day. I've always enjoyed 'classic house' music from 1988-1995 but also love the modern style of dance music such as progressive house, deep house, breaks and even, some dubstep.

I'm not that great at it, certainly no Liam Howlett or Fatboy Slim, but I've been writing tracks with various music programs under the pseudonym of 'Shockwave' since 1995. Newer tunes are more house, deep-house, trance styles. The older tracks being faster, harder and much more primitive but very energetic dance music.

The online Slots Machines that use modern 3D graphics for the best online casinos in USA are reviewed on Blackskies.com
Playing the best online slots real money is thrilling and exciting, however it is important to find reputable licensed USA online casinos. PlaySlots4RealMoney.com helps people that play slots for real money find safe and secure mobile gambling sites.
3D graphics have been put to good use in modern slot machines, as this page at vegasslots com reviews.